California is the third largest and most populous state in the United States. Los Angeles is the second most populous city in the United States, following New York City. California is considered a global trendsetter in culture, innovation, and entertainment. It is a hotspot for diversity and migration. Its culture deeply integrates food, languages, and traditions from various cultures.

California is also considered to be the origin of the American film industry. It draws people from all over the world as a leader in entertainment, music, technology, engineering, and aerospace.

California’s name originates from Spanish rule. The Spaniards named the state after the fictional story of Queen Calafia from The Adventures of Esplandián. The story tells of a remote land that is rich in gold and pearls. The Spaniards hoped that California would emulate this fictional paradise.

California was originally home to various indigenous groups. Before European settlement the land was occupied by seventy distinct ethnic groups of Native Americans. The cultures created strong relationships through intermarriage and military alliances. As Europeans entered California, the Native American population was conquered by diseases like measles and diphtheria. Eventually, the Spaniards overpowered the indigenous peoples of California.

California was primarily colonized by Spanish explorers, the first being Juan Rodríguez Cabrilo in 1542. This Portuguese captain led a Spanish sailing expedition as far north as the Russian River. Thirty-seven years later, Francis Drake claimed part of California for Spain in 1579. Throughout the rest of the sixteenth and seventeenth centuries, Spaniards continued to explore and colonize in California. From 1769  to 1770, the Portola Expedition established twenty-one California Missions which would eventually grow into towns like Los Angeles and San Francisco.

In 1821, Mexico, which included part of California, gained its independence from Spain. In the following twenty-five years California remained a remote territory of Mexico. After it gained independence the missions became secularized by 1834 and became Mexican government property. The economy was dominated by ranchos, trappers, and settlers.

On February 2, 1848, the Treaty of Guadalupe Hidalgo ended the Mexican American War in favor of the United States. California, along with Arizona, California, Nevada, New Mexico, Wyoming, and Utah became United States territory.

In 1848, The Great California Gold Rush brought a new wave of immigrants to California. The economy boomed and brought people from all different cultures and California slowly grew into a majorly populated United States territory.

The state became an official United States territory in 1850 as a part of the Compromise of 1850.

Throughout the Civil War California didn’t contribute troops to the war effort, but they were able to contribute in other ways. California funded and supported the Union by sending gold to Washington. Even though there weren’t troops directly from the state, there were many, such as the California 100 Company, that were associated with California.

For years, California was separated from the rest of the country as it was extremely difficult to travel to. The construction of the First Transcontinental Railroad in 1869 opened an array of economic opportunity to Californians. Their economy continued to flourish during and after World War II through the boom of aerospace, defense, engineering, technology, fruit cultivation, and agriculture.

Now California is the largest sub-national economy of the world.

California’s state flag is reminiscent of the Bear Flag Revolt of 1846. On June 14, 1846, American settlers stormed Sonoma and took a Mexican commandant prisoner. They declared their independence from Mexico and California became a Republic.

California’s state flag was designed by William Todd, who was the nephew of Mary Todd, Abraham Lincoln’s wife. The state flag depicts a bear and a star. The bear is symbolic of the strength of California. Grizzly bears are also the California state animal. The star represents sovereignty. It is also reminiscent of the Lone Star of Texas.

The colors of the state flag also contain specific meaning. The red is a symbol of courage. The white background of the flag represents purity. The state flag was officially adopted in 1911. 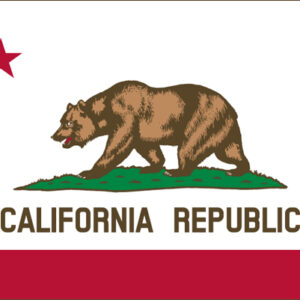