Arkansas was named after the way that French explorers used to refer to the Quapaw people, an indigenous group of Arkansas, and the river that they were settled on. Arkansas was inhabited by many Native Americans long before European settlers arrived. The Caddo, Osage, and Quapaw people all lived throughout the state.

The first documented major encounter with European settlers was with Hernando de Soto, the Spanish explorer. Many French explorers also traversed Arkansas, such as Jacques Marquette, Louis Jolliet, and Henri de Tonti. In 1681, Tonti established the Arkansas Post, which was the first official European settlement in Arkansas. It became a home base to settlers and fur trappers in the eighteenth century.

Ownership of the territory was exchanged multiple times between France and Spain during the Seven Years’ War. In 1803, the United States purchased Arkansas from Napoleon Bonaparte as a part of the Louisiana Purchase. The territory was accepted into the Union as the twenty-fifth state on June 15, 1836.

Arkansas’s economy was heavily centered around cotton and plantations. Even though the economy of Arkansas relied on slave labor, they originally voted to stay in the Union. It wasn’t until after Lincoln sent Arkansas troops to Fort Sumter to try to suppress the rebellion that Arkansas seceded from the Union in 1861.

Soon, Arkansas became a very important state during the Civil War. The Confederate Army used Arkansas to maintain control of the Mississippi River and the surrounding Southern states. Many important battles took place in Arkansas such as the Battle of Cane Hill, the Battle of Pea Ridge, and the Battle of Prairie Grove.

After the Civil War, Arkansas accepted the Fourteenth Amendment and was readmitted into the Union in 1868.

Arkansas’s economy was dramatically impacted by the construction of railroads, as it allowed farmers to ship their products to market. It also allowed the development of different, parts of the state.

Arkansas was essential in the progress of the Civil Rights Movement. The decision of Brown v. Board of Education of Topeka, Kansas, deemed the segregation of schools to be illegal. Shortly after the decision, in 1957, nine black students tried to integrate Little Rock’s Central High School. The Little Rock Nine brought attention to Arkansas and to the issue of segregation of school. Governor Orval Faubus ordered the Arkansas National Guard to help the segregationists in inhibiting the integration of schools. President Dwight D. Eisenhower tried to contact Faubus to tell him to call off the Guard. Faubus failed to comply, and Eisenhower sent 1000 troops from the active duty 101st Airborne Division to safely escort the Little Rock Nine to school on September 25, 1957. This historical event led to the eventual complete integration of Little Rock high schools by the fall of 1959.

Currently, Arkansas is well-known as being the birthplace and home of forty-second United States president, Bill Clinton. Additionally, the multinational retail corporation, Walmart, was founded in Rodgers, Arkansas in 1962, and is currently headquartered in Bentonville, Arkansas.

Arkansas is also known as “The Natural State.” It is home to fifty-two beautiful state parks.

The Arkansas state flag is red, white, and blue. The design includes the word “Arkansas” surrounded by four blue stars and encompassed in a large white diamond with a blue border.  The blue border contains twenty-five white stars.

The three stars below “Arkansas” represent the three different countries—Spain, France, and the United States—that controlled Arkansas. The three stars also represent that Arkansas was the third state to come out of the Louisiana Purchase. The star above “Arkansas” is for the Confederacy. This star was not originally included in the design but was added ten years after the design was adopted.

The Arkansas flag was designed after the USS Arkansas was commissioned, but there was no state flag to fly on the ship. The Daughters of American Revolution held a flag design competition. Willie Hocker from Wabbeseka, Arkansas won and created the current design, which was adopted as the official Arkansas state flag on February 26, 1913. 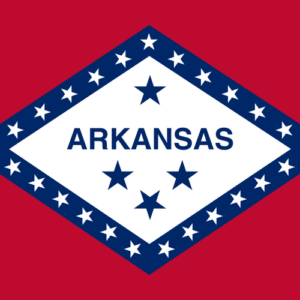