Arizona is the sixth largest state in area and the fourteenth most populous state in the United States. The origin of the state’s name is uncertain; however, scholars have different theories. Some scholars believe that it was influenced by a Basque phrase meaning “place of oaks.” Other scholars believe that the state name originated from a Tohono O’odham (a Native American tribe of Arizona) phrase meaning “place of the young (or little) spring.” Arizona has been nicknamed the Copper State and the Grand Canyon State.

Arizona was the forty-eighth state, and last contiguous state, to officially join the United States. Arizona became an official state on February 14, 1912.

Arizona’s history is heavily influenced by many Native American tribes including the Ancestral Puebloans, Hohokam, Mogollon, and Patyan people.

The Native Americans continue to influence Arizona’s rich culture.  One fourth of the state is made up of Native American Reservations and is home to twenty-two American Indian communities. Each tribe’s land is a sovereign community, which means it has its own government and laws.

The first European to explore Arizona was a Spanish Franciscan named Marcos de Niza in 1539. Soon after, the Spanish explorer, Coronado, took his expedition through Arizona in search of the Seven Cities of Cíbola.

Arizona was soon occupied by Spanish settlers. Spanish Christian missionaries all across Arizona attempted to convert Native American tribes to Christianity in the late seventeenth and early eighteenth centuries.

In 1821, Mexico officially claimed their independence from Spain, and Arizona became a territory of Mexico. From 1847 to 1848, during the Mexican American War, the United States occupied Mexico City and Northern Mexico, which would eventually become Arizona. The United States bought Arizona from Mexico in 1848 by means of the Treaty of Guadalupe Hidalgo.

Shortly after it became an individual territory in 1863, Arizona became more heavily populated as a result of the gold and silver rushes. The rushes did not last long however, and many people quickly left after the precious metals ran out. This resulted in a string of ghost towns across the territory.

While the prosperity of silver and gold was short lived, copper mining flourished. Arizona has come to be known as the Copper State and the number one copper-producing state in the United States.

Arizona’s cotton and copper industries during the Great Depression. However, in the 1920s and 1930s, Arizona’s tourism flourished into the prosperous industry that continues today. Visitors from all over, pay to visit dude ranches and enjoy other natural beauties the state holds.

During World War II, Arizona was the location of German prisoner of war camps and Japanese American internment camps. Arizona also contributed to the war by enlisting the Navajo people to transmit secret communications after Pearl Harbor. This group of influential Native Americans came to be known as the Navajo Code Talkers.

Though Arizona is primarily a desert, the state is full of beautiful landscapes and natural formations. Arizona is a part of the Four Corners, along with Colorado, New Mexico, and Utah. This state is also the location of the Grand Canyon.  About five million people travel to Arizona to visit the Grand Canyon each year.

Arizona is also home to Oraibi. This Hopi Indian village is the oldest continuously inhabited settlement in the United States.

Arizona’s flag is made up of thirteen rays of red and yellow, a copper star, and a blue field. The rays resemble Arizona’s landscape and the rays of the sunset. The red and yellow resemble the colors of the flag carried by Coronado’s expedition. The copper star is representative of Arizona’s abundant copper production.  The blue, which is the same shade of blue as the United States flag, symbolizes the Colorado River, which runs through Arizona. Blue and gold are also used because they are considered to be Arizona’s state colors.

Arizona’s state flag was originally designed as a rifle flag by Charles Wilfred Harris. The Arizona National Guard rifle team was the only team without an emblem at the Camp Perry competition. Harris quickly designed the flag, which was adopted as the official state flag on February 17, 1917.

In 2001, Arizona’s state flag was voted to be one of the ten best United States flags. 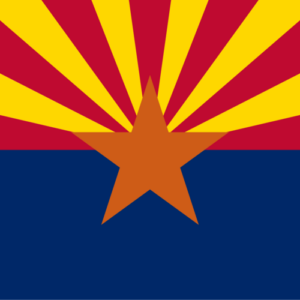